Vice-Dean for Science and International Relations 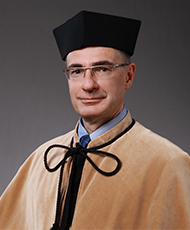 Professor Artur Osyczka graduated with a Master's degree from the Institute of Molecular Biology of the Faculty of Biology and Earth Sciences of the Jagiellonian University in Kraków in 1993, before going to receive a PhD in biological sciences from Tokyo Metropolitan University in Japan in 1999. As part of his postdoctoral fellowship from 1999 to 2006, he conducted research at the Department of Biochemistry of the University of Pennsylvania in Philadelphia. In 2006, as a beneficiary of a Wellcome Trust International Senior Research Fellowship (ISRF), he was able to return to Poland and create the Molecular Bioenergetics group at the FBBB Department of Biophysics of the JU in Kraków. In 2011, he was awarded a further ISRF to pursue his work on his chosen topic of research. He was awarded the title of dr. hab. (higher doctorate) in 2007, and that of professor in 2014. He has been Head of the FBBB Department of Molecular Biophysics since 2017.

Professor Osyczka's research interests focus on gaining a more in-depth knowledge of the molecular mechanisms underlying the functioning of biological energy-transforming systems, including the mitochondrial respiratory chain and the photosynthetic chain in particular. His research studies concern both bacterial and eukaryotic systems and aim, amongst other things, to describe processes involved in the transport of electrons and protons within bioenergetic complexes, the dynamics of interactions between redox active proteins, mechanisms of catalytic reactions conserving energy and side reactions leading to the formation of reactive oxygen species and the molecular basis of mitochondrial mutations. In his studies, he combines the use of techniques of molecular genetics with structural-functional analysis based on advanced spectroscopic techniques, including time-resolved optical spectroscopy and electron paramagnetic resonance.

Professor Osyczka is the author of over 70 scientific articles in the field of molecular bioenergetics. His achievements include work published in both general scientific journals (such as Nature, Science, PNAS, Physiol. Rev., TiBS) and specialist scientific journals (JACS, BBA-Bioenergetics, Biochemistry, JBC), as well as chapters in monographs (Chemical Biology, Advances in Photosynthesis and Respiration). He was the editor of a special edition of Biochimica et Biophysica Acta entitled "Respiratory complex III and related bc complexes". He is the leader of research projects funded by the Polish National Science Centre (NCN) and the Foundation for Polish Science (FNP). In 2011, he received an award from the President of the Polish Council of Ministers for exceptional scientific achievement.