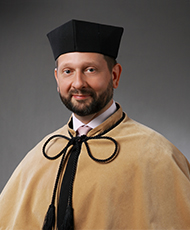 Dr. hab. Andrzej Górecki started work at the Jagiellonian University in 2001. He has been associated with the Department of Physical Biochemistry since the start of his career.

His research interests focus on proteins, and transcription factors in particular. His research into mutated forms of one of these factors – the bacterial protein CRP – allowed him to obtain his PhD in biological sciences in the field of biochemistry in 2006. In 2019, as a result of a series of works on the human proteins TFIIB and YY1, he was awarded the title of dr. hab. (higher doctorate).

Dr. Górecki considers the functions of proteins to be a consequence of interactions with ligands, nucleic acids and other proteins. He examines their structural, kinetic and thermodynamic aspects. He analyzes the consequences of changes in the structure and dynamics of the studied proteins caused by the aforementioned interactions, especially where Intrinsically Disordered Proteins (IDPs) are concerned. In his studies, he applies spectroscopic techniques such as circular dichroism, or stationary and time-resolved fluorescence spectroscopy. Studies are conducted in an in vitro system based on recombinant proteins, though Dr. Górecki attaches a great deal of importance to placing the results obtained in the context of the functioning of the cell and organism. Dr. hab. Andrzej Górecki's current interests are moving in the direction of studying single protein molecules.

During the course of his career, Dr. hab. Andrzej Górecki has not only been engaged in scientific and teaching activities, but has also performed various organizational functions. From 2006 to 2013, he was head of part-time studies at the FBBB, contributed to the creation of the scientific association of biochemistry students N.Zyme and been its supervisor since 2012; he is a member of the Departmental Commission for the Repair of Equipment (since 2013); served as Proxy to the Dean of the FBBB for student internships (2019 r.), and is also Deputy Coordinator of the Executive Team for the BioS Priority Research Area (Priorytetowy Obszar Badawczy BioS – POB-BioS) acting within the framework of the Jagiellonian University's Strategic Program Excellence Initiative (Inicjatywa Doskonałości – ID) (since 2020).

In 2020, he was elected as a member of the Senate of the JU and appointed Vice-Dean for Development of the FBBB.