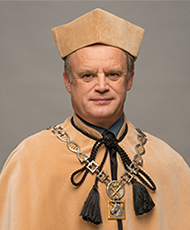 Professor Zbigniew Madeja received all his degrees at the Jagiellonian University. He graduated from the Faculty of Biology and Earth Science in molecular biology and it was also at the same faculty that he received his Ph.D. In 1991 he was hired as a researcher at the Department of Cell Biology of the Institute of Molecular Biology and has worked there ever since. In  2006 he became the head of the department.

Professor Madeja did his research internships in, among other countries, Sweden and Switzerland. His research interests include, among other subjects, the mechanisms of migration of regular and cancer cells, especially the influence of homo- and heterotypic cell-to-cell interactions on the movements of cancer cells, the cell response to the topography of the medium (guiding through contact), the mechanisms of electrotaxis (cell response to electric field) and chemotaxis. He has published more than 50 works in the discipline.
Professor Madeja is also a member of the board of the  Committee on Cell Biology at the Polish Academy of Sciences.  A number of times he has received the Excellence in Teaching Award of the Jagiellonian University Rector. He became a full professor of biological science on 7 October 2010.